Thanks to Wong1979 from clubsnap for graciously allowing me to reproduce his excellent pictures of the Oriental Pied Hornbills [ Anthracoceros albirostris ] here on this blog. Thanks to Sharkspin for id of the birds. I would like to take this opportunity to highlight the

Hornbill Project Singapore you CAN make a difference. Read all about
our own hornbills and how you can help with your sightings on the
bird ecology blog http://besgroup.blogspot.com

Be Watchful for poachers though when admiring these birds. It would be sad if they were caught by poachers (like the colugo incident) or the nests were disturbed.

Fact sheet with photos on flora and fauna of Chek Jawa, Pulau Ubin

Picture of a Male from the Oriental Bird Club.

Wonder about the name in Chinese, Japanese and vietnamese?
Posted by Kevin at 3:59 PM No comments:

LOL I stared at the screen for 5 mins to think of a title for this post. Firstly I didn't know that rats can swim out to sea until the owner of these pics did a bit of research(see original thread). Can anyone id the eagle and also comment on this behaviour? text in italics belong to the pic owner

UPDATE: Thanks to Dr Wee and Mr Subaraj, the identity mystery is somewhat solved. They should be juvenile White-bellied Fish-Eagles Haliaeetus leucogaster

here's rest of Subaraj's reply
Though somewhat dark, they appear to be juvenile White-bellied Fish-Eagles Haliaeetus leucogaster. Fish Eagles are known to take anything swimming in open water. Besides fish, they are also known to take sea snakes and turtles. A rat swimming should be no exception. This rat could have been swimming across somewhere or may have come off a boat.

I saw some eagles hovering above the sea and thought they must be fishing for fish until on closer inspection ...huh? Fish got tail meh?

I thought it could be some kind of monitor lizard or sea creature with a tail, but from the vague shape I can make out of, it looks like a rat. So I went googling and found out that indeed, a rat can swim half a mile out into the sea.

After which, I saw another eagle sparring with it, as if to snatch the food:

hmm the pic looks brighter with another computer but its too dark to see anything on this one.. uploading new edited for brightness 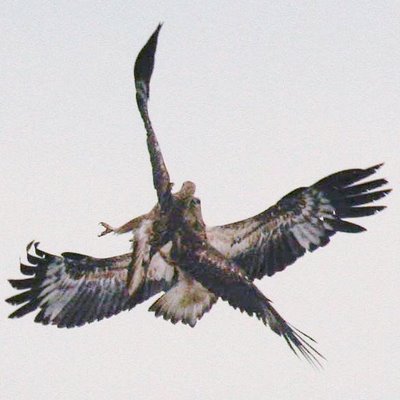