http://forums.clubsnap.org/showthread.php?p=1761911#post1761911
by skfoo
"Last year, a Kestrel was spotted at a reclaimed land in Changi. If I am not mistaken, prior to 2004, the last time anyone spotted a Kestrel in Singapore was 10 years ago!

This year, our (Sree and myself) encounter with it came as a shock. Sree almost jammed his breaks when I suddenly sounded out to him that a Kestrel was on the ground. There was a lizard under its claws.

Sree’s equipment was in the car boot. Mine was on the rear passenger seat in his car. Not wanting this rear opportunity to be missed, we decided to setup my gear first. By then, the Kestrel has flown up a nearby tree. As any delay would result in photographing the Kestrel without its food, Sree position his car to allow me to shoot from his rear passenger seat. Half way through, we thought the Kestrel would take its time to feed on its prey. So we backed off for Sree to setup his gear. Setting up the gear was fast but when we returned to the same location, the food is no more. The Kestrel may have swallowed the last bit of the lizard in full."
Posted by Kevin at 1:03 AM 1 comment:

"A rare resident of Singapore, usually seen only near water."
Posted by Kevin at 11:21 PM No comments:

http://forum.clubsnap.org/showthread.php?t=165560
Must See Post! Great pics of a grey heron feeding on a prawn, copper banded butterfly fish, catfish. LOL its almost a study on the feeding habits or perhaps fauna at the seletar dam thanks to a very hungry grey heron!

Thanks to Harlequin for allowing me to replicate his photos!

A large prawn for starter 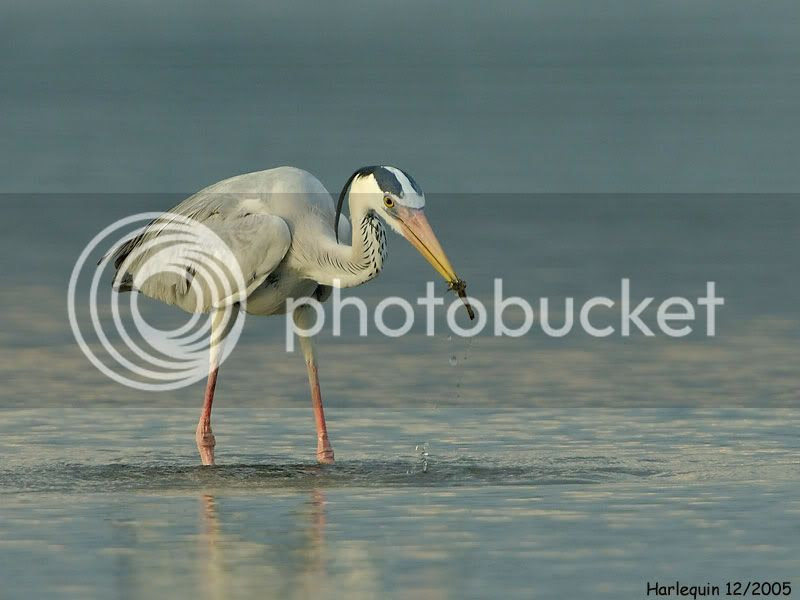 A Copper-Banded Butterfly fish - not a typical fish (as it is flat and very hard for the Grey Heron to swallow). 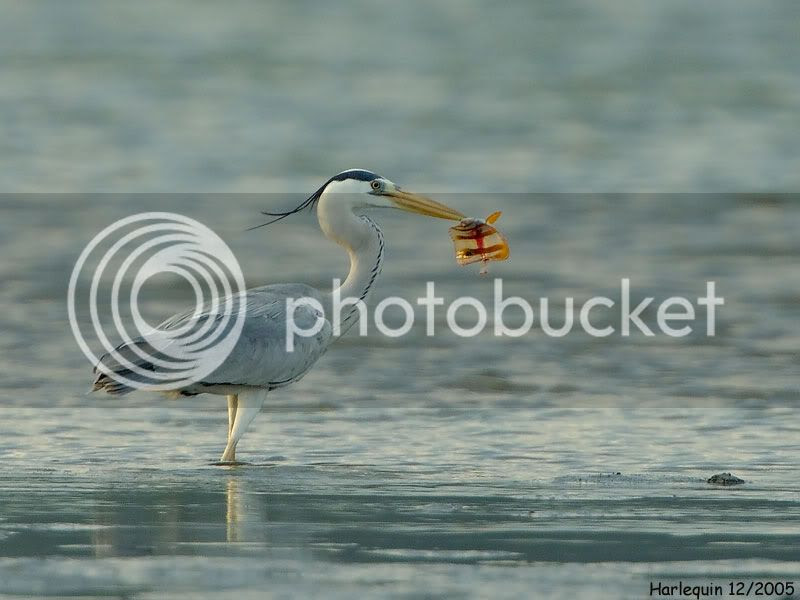 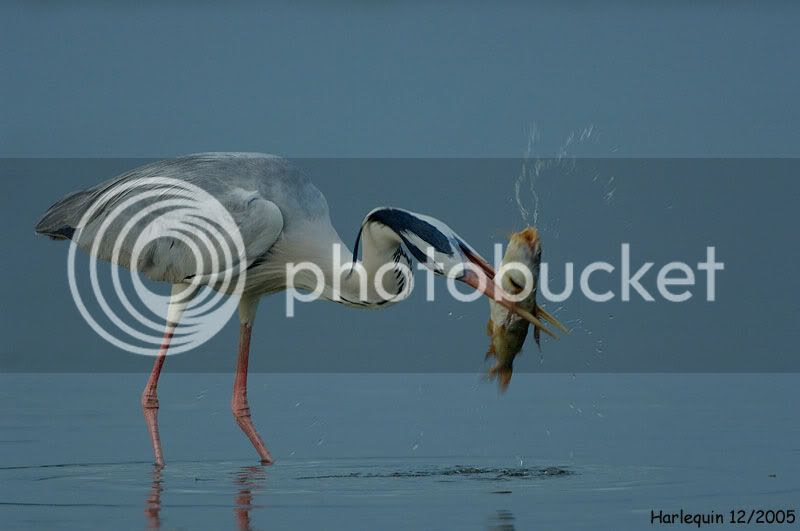 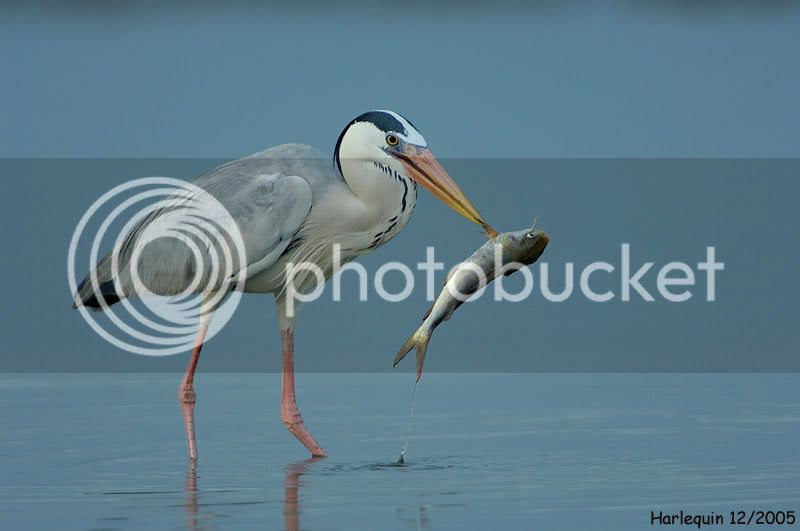 A bit too greedy I would say 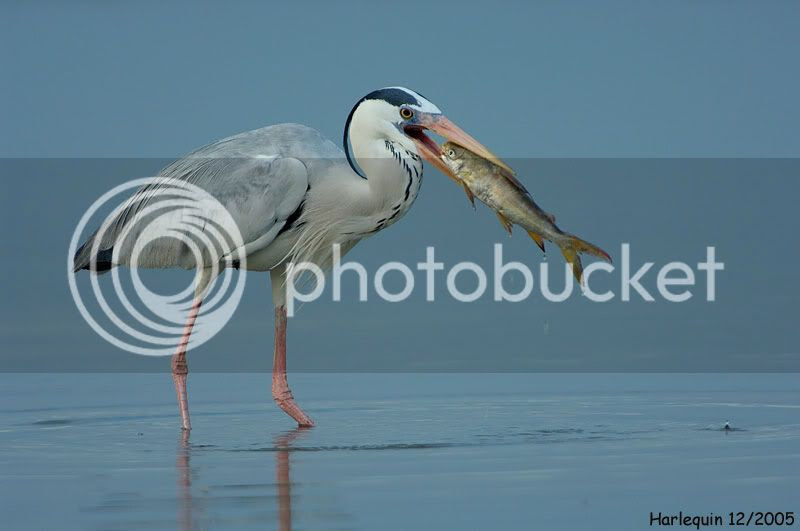 Spotted 2005 December 10th 15:41. This is beside the jogging trail in sunset way. Was staring at a piece debris trying to think if its a Malayan Box Terrapin when a dark shape loomed into my field of view and I quickly snapped a few off focus shots. My mind was racing wildly even though they are pretty common. But this was the first time I was soooo close to one! They are usually very secretive jumping into the water if spotted. This one was caught by surprised by a surprised me hahaha. I even managed two shots of it swimming in its undulating fashion that was so graceful. You can tell its a powerful swimmer because it was just effortlessly fighting the strong current. It looked like it was almost 1.5m When it saw me it just sank underwater. DARN! Apparently they can remain underwater for up to 30 mins. I circled the area abit and about 5 mins later, it popped its head up again! It was kinda freaky using a telephoto lens to zoom in on its head. It seemed to be measuring me up. Meal or bothersome ape? Oh by the way they actually have brown eyes! That's something I didn't know. I do know that they will eat anything they can swallow and they are particularly fond of carrion. There's abundant armoured sucker catfishes, tilapia there and lots of herons. Never seen it try to attack a heron but apparently they run very fast with their powerful leg muscles. But herons do eat youg monitor lizards. Of course they are prey to humans, even in Singapore. About 12 years ago, I saw a bunch of people setting up traps in west coast park for monitor lizards, and I know of 2 who actually tasted lizard meat before. Heh that's years ago though. 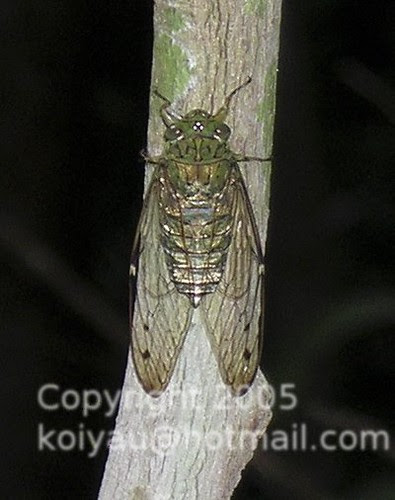 Spotted this forest cicada somewhere around the treetop boardwalk in the Central Catchment. The date? Erm..its a year ago. Heh I am really good at procrastination. I shot this at 2004 December 4th at 3pm or so. Forest cicadas are so so so hard to miss....their calls at least. When people tell me they enjoy the sounds of the forest, the call of the forest cicada inadvertently comes to mind. This is a really lucky find for me, I just followed the call of this critter because it sounded really really close. And Voila! There it is. Took a few shots but this is my best. Heh but the resolution is poor because I don't have a telephoto then. Remembered this shot because of a post at the habitatnews blog.

Robberflies @ Sime Forest, near the Treetop Boardwalk. by Steven Wee 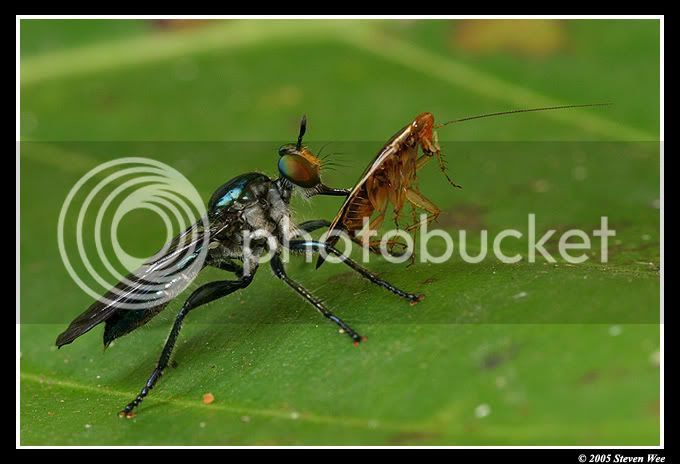 Nice writeup on robberflies and a shot of one sucking the life out of a
forest cockroach. Heh if I didn't know that there are forest cockroaches
and that they are smaller. I would have easily thought the cockroach was photoshopped onto a normal fly...
http://forums.clubsnap.org/showthread.php?p=1708278

here's the writeup by Steven
Robberflies make for fascinating macro subjects. A robberfly hunts its prey (mainly smaller insects) and intercepts it in mid air, stabbing it with its piercing mouth appendage. It will then return to its perch and begin eating its catch. This process begins with the robberfly injecting a fluid into its prey that liquefies the internal parts of the insect so it is easily sucked out. With close to 4,000 species of robberflies found throughout the world this highly predatory insect preys on most flying insects including some species of bees and wasp. In this case the prey appears to be some species of forest roach. 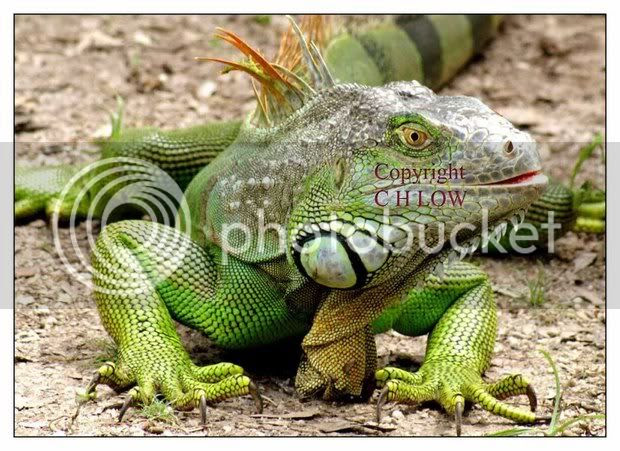 I will be excited as well if its just Calotes versicolor I see day in day out and I see this! Be careful though it might be mildly venomous.Here's another sighting http://pachome2.pacific.net.sg/~tanghb/Green_Iguana.html . I was disappointed though when I found out that these are all exotics. Hmmm seems like there are more and more of these released from the chat going on in that clubsnap thread. Anyway for more info check out the Singapore Zoological Gardens Docents' info trove.